This week we started learning about China and volcanoes. Today we did a fun demonstration to show how magma pushes up land to form one type of volcano. I filled a plastic cup 2/3 full of dirt and cut a hole in the bottom of the cup. A tube of toothpaste was our magma chamber and we squeezed the "magma" into the base of the cup, pushing the dirt up. Eventually our "magma" broke the surface of the dirt so the volcano could have a slow eruption. Abbie and I thought it was fun. Adriel commented that David looked like I was tormenting him by doing the demonstration. (Maybe it was that up coming Latin test he was thinking about!) I guess you can't please them all. David made a cool diagram of a volcano. Here is is...

David -
Latin LfC ch. 15, working on sentence patterns and some new vocabulary words. I haven't graded the test yet but I think he will do fine.
Math , up to chapter 10 now. He figured out that he is 1/3 of the way through this book. Got to love those fractions!
China, Reading about Hudson Taylor has been eye opening. David was impressed by how much this missionary respected the Chinese people and even dressed like them.
Abigail-
Latin, practicing vocabulary from previous weeks and she made a lap-book about the Latin names for family members.
Math, started MUS Gamma and Singapore 2B. We did skip ahead to do some fractions work because that was more interesting for her.
Project, Building the Lego Creator draw bridge all by herself. Once it is finished I will post pictures of the process.
Posted at 10:08 AM No comments:

This week we have been spring cleaning. Books and toys have emerged from under beds, the laundry is getting done and the kitchen has been consistently clean! Still left is my room and then the actual purging of drawers, toys, clothes and the straightening of cupboards. Then we will wash all of the windows, doors and basically deep clean everything. I would love to be done by next week, but we will see how it goes.
Consequently school has been reduced so that I can take advantage of child -labor! They have mostly been working on their own rooms.
For school this week we concentrated on Latin, Math and Writing. David is writing longer paragraphs now which he really doesn't like. He is quite a good little writer but the increase in expectations upsets him. We have to be building up the expectations now though, next year is Jr. High!
Math - lesson 6 was called "The rule of 4" basically how to get common denominators so you can add and subtract fractions. David was a little nervous about fractions but he is really getting it and today we will be moving on to lesson 7 "Comparing Fractions".
Abbie did math lessons about subtracting with borrowing to the thousands place and with money. She did need to work on showing her work properly but the problems were not very difficult. We are nearly done with this book so this week I ordered the next two levels of Singapore Math. I also got the "challenging word problems" book that deals with multi step problems that I hope will be interesting to Abigail.
Latin - David is on ch. 14, 2nd conjugation verbs. It really seems like David is hitting his stride and beginning to understand the big picture. He is doing really well and even found a typo in the Latin Activity book! He was pretty proud of that.
Abbie received her own Latin book last week. It is Song School Latin from Classical Academic Press. She is loving it! She is learning practical words for introducing yourself, asking how someone is doing and words for family members and school objects. It came with an audio CD filled with cute songs to help practice the vocabulary. Whenever we turn it on Miriam starts dancing.
The girls also started gymnastics at the YMCA this week and they are really enjoying their new classes and meeting new friends.
~Christina
Posted at 7:17 AM 2 comments:

Sailboat update: With the structural repairs complete we are starting the painting process. For the last few weeks I have spent many hours in the garage covered in green paint dust grinding away at the old paint. 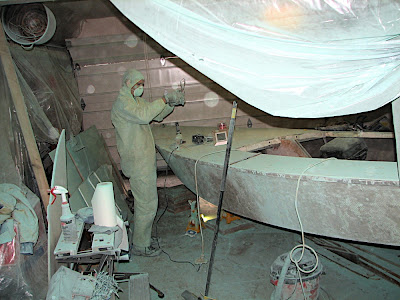 Today I finished - the entire boat is now bare fiberglass, ready for an overcoat of resin and a brand new paint job. 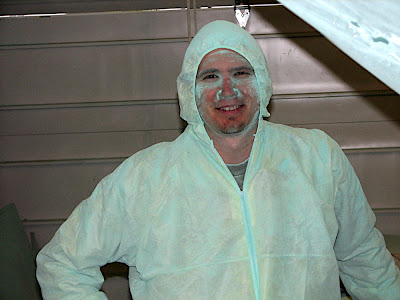 First order of business: Getting ALL the green dust out of the garage!

(More background about the boat project here)
Posted at 8:14 PM No comments:

The Samsung Instinct, the new Phone that Sprint/Samsung are hoping will take the air out of the sails (sales) of the iPhone.

Ironically it was announced on April fools day, but it is for real. See the site or some product shots. It looks nearly identical to the iPhone. Full black glass face with rounded silver edges and rounded back, same slit for the speaker in the top. Three buttons at the bottom instead of one. It tries to function identically, similar screen animations, same touch control.

The release event was very controlled, the press were given strong talking points and had to move from station to station to try out one function of the phone at a time - apparently Samsung doesn't quite have the software running smoothly overall yet to let the press just straight-up use the phone. It's going to be launched with a $100 million ad campaign, the biggest ever hype in the cell phone industry.

Just like iPod and the wanna-be's, here we go again. People will keep buying different "just like it" phones because the spec sheet looks better or the price is lower until they realize that copies just don't provide the same experience. And if you are in the market for an iPhone it is entirely because of the simplified user experience and high design standards.

Healthy competition is about original ideas playing against each other, not about straight up copy-catting. I'm all for competition, but stand on your own ground, design your own product, make it bold and strong, don't be afraid to be unique from the ground up.

Shame on you Samsung/Sprint. Now throw out the Instinct, take what you have learned by studying the iPhone, and design something bold and strong that stands on it's own! The best selling iPod competitors weren't look-alike knock-offs of the iPod, the same will be true of the cell phone market.
Posted at 9:34 AM 1 comment: