This is what I did Wednesday.  I should have thought to take before pictures.  Trust me; it was not pretty.  How is it that a place where you only put clean dishes ("clean" being somewhat relative based on who is doing the dishes....) can get so gross? 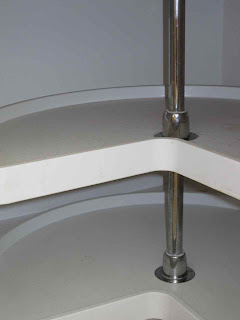 That is a very deep cupboard and scrubbing that back corner felt a bit like some kind of crazy gumby yoga.  But it's clean! 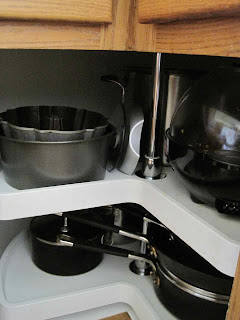 Many of the pots and pans got an updated "Mom cleaning" too. 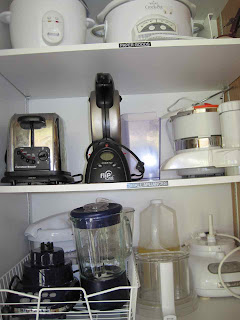 I cleaned and rearranged the small appliance cupboard too so that I could fit in my new (to me) juicer.  Whole carrots really make smoothies a bit too chewy for my taste and I wanted to be able to make carrot juice.  It works great and the carrot/mango/orange smoothie I made Tuesday was declared yummy by everyone.
Posted at 5:30 AM No comments:

Email ThisBlogThis!Share to TwitterShare to FacebookShare to Pinterest
Labels: Housekeeping

One for the Birds

I often leave the back door open in good weather.  We end up with flies and the occasional bee in the house, but it keeps me from being the door-man to the dogs all day long.  Today was a first though; a bird flew in and couldn't get out.  He was stuck behind my sewing tables which are piled high with projects and not easy to move.  I was trying to shoo him out when Morpheous went right under the table and helpfully grabbed him for me.  Gee thanks Morph.  I can't really blame him.  A couple centuries of careful breeding means that literally every fiber of his being lives for the day he can do just that.
A quick yank of the collar and the newly freed bird had plenty of motivation to find the door.  He was over the next roof in a blink.
---------------------------
A couple of hours later a commotion in the living room introduces me to, yes, our second bird friend of the day.  This one Morph went out and found for us.  Gee thanks Moreph...... again.
I thought the little thing was near death because it wasn't moving, but when I went to the kitchen for a bucket it scurried under the TV cabinate.  Now I had a presumably injured bird behind several hundred pounds of tv and I didn't know if I should be trying to free it, or put it out of it's misery.
Thank goodness for my tall skinny son with bird knowledge.  He got himself halfway behind the cabinate, chased the bird out, and then "toweled" it and took it outside.  That boy has a heart of gold.  He tucked the bird under a bush and stroked it's back for a long time.  Eventually the bird felt well enough to run under the fence to the garden area and that's when I was able to snap this picture. 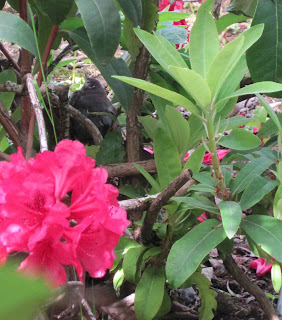 She here is our little fat grey bird (top left) in the garden with plenty of bushes for protection and worms to eat.  We are hoping that he was just stunned and is doing well.  If not, I guess the local owl will be well fed tonight - eek!

David and I are trying to decide if Morepheous had a wonderful day of bird hunting, or a terrible day of victory denied.  Oh the life of a hound stuck in the suburbs!

In the course of two days this weekend my three children will attend 4 parties between them.  Yes, I understand that when you have teens your parental role is a kind of cross between a taxi and an ATM,  but two of them are not teens yet (and won't be for years)!  The teen's party was actually free and he found a ride.  I have no social engagements, but my 6 yo has two in one day.   It boggles the mind.
Posted at 11:31 PM No comments:

A new way to mop

There are those occasions of mothering genius, born out of desperation most times, that make you wonder why you never thought of it before.

Lysol wipes + fun music + convincing two little girls that they are "skating" = A cleaner floor than you started with, and a whole lot of giggles. 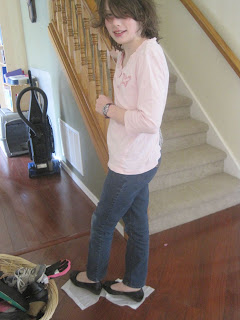 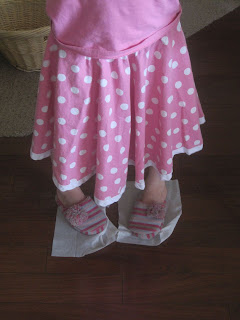 Proving that she is indeed her father's daughter, the other day Miriam woke up and announced to me that she wanted to fix something.  Did I have anything she could fix?

I thought better of letting her tackle the finer workings of a microwave's electrical system, and we settled for taking apart and reassembling the foot stool. She did an excellent job and I only needed to help a little. Watch out world Miriam the fixer is here. (She calls repair people "fixers"- seems very logical to me) 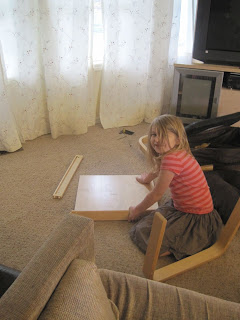 Email ThisBlogThis!Share to TwitterShare to FacebookShare to Pinterest
Labels: Miriam

Whats in a Name

I decided when I started My Sailor Girls that after X amount of orders I would have labels made.  I really like how they turned out and they add a simple nice touch to the finished clothing. 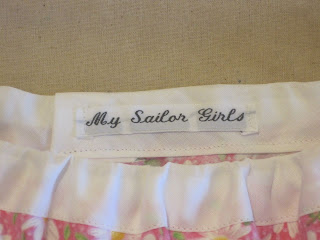 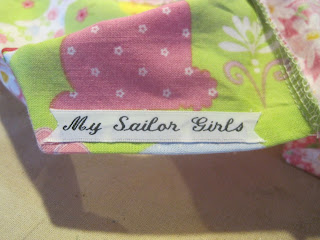 Email ThisBlogThis!Share to TwitterShare to FacebookShare to Pinterest
Labels: My Sailor Girls, Sewing and Crafting

Off to Arizona We Go 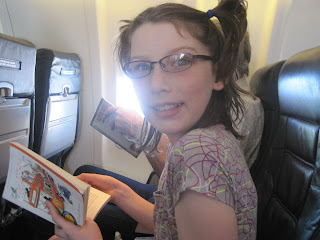 Miriam made it a point to tell everyone she could that we got to go on 4 airplanes  in one weekend. It was just so very exciting! 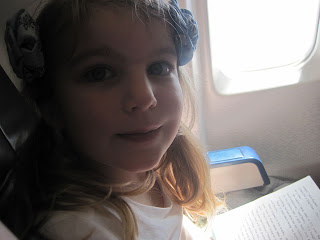 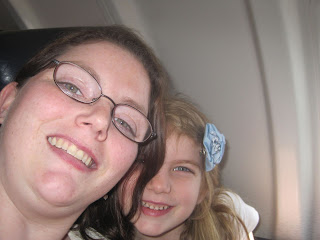 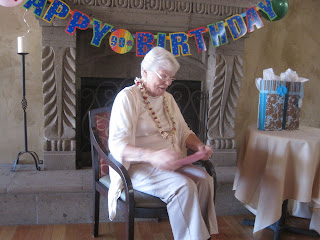 Of course the reason for this trip to the sun was my grandmother's 90th birthday party.  Yep, she is officially amazing. It was a great party and I got to catch up with cousins I hadn't seen in a couple of decades.  I truly enjoyed all of them and wish we were not spread all over the country.

The girls had a great time swimming, playing with cousins and eating at Chick-fil-A of course!  I am terrible at taking pictures when we area away from home so you will just have to imagine my two little white Oregon girls slathered in sun screen and wearing hats in the hotel pool. 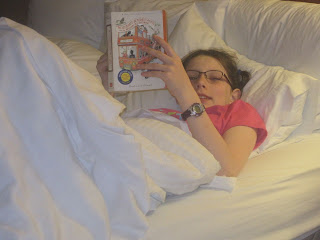 Reading before bed in our cozy hotel room. 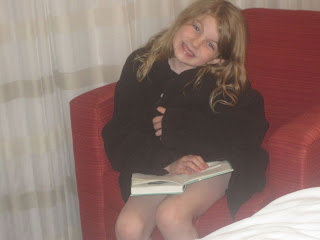 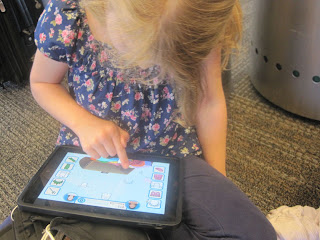 How to keep tired little girls busy while waiting to board another plane..... 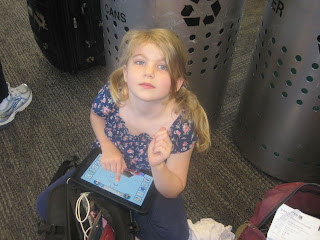 Thanks Daddy for helping with this trip.  We had a great time!
~Christina

I just love this tiny crown! 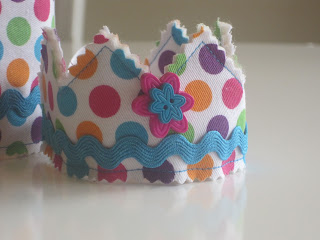 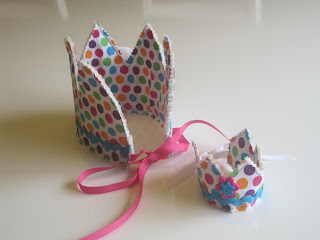 I have added a new accessory to My Sailor Girls - matching doll and girl crowns.  Come on over and check them out! Perfect for birthday parties, special occasions or the newest addition to your dress-up closet these crowns are soft and the ribbion tie makes them fully adjustable from toddler size on up. 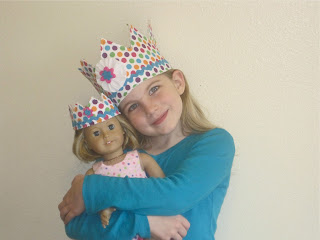 Every Queen needs her dolly princess you know.

Email ThisBlogThis!Share to TwitterShare to FacebookShare to Pinterest
Labels: My Sailor Girls

Have you ever just strapped on your Nikes, iPod blasting in your ears, and hit the pavement flat out as hard as you could out of sheer frustration? While I am positive that "emotional running" is way healthier, emotional eating would have gotten me to bed a lot sooner. No need to shower afterwards.  I'm just sayin'.
~ Christina
Posted at 10:17 PM No comments: