We are getting a new student!  J is 10 yo and is joining our homeschool for this year, so if you see an extra kid in the pictures I post, it's him.  We are excited to add someone to our little school.  I am also watching two little ones (3 yo and almost 2 yo) for a friend.  She is at the hospital with her youngest.  Baby Elizabeth could use any prayers you can send her way.  Her big sisters really miss Mommy and we want Elizabeth to grow up big and strong.
It is gearing up to be a busy week!
~Christina
Posted at 8:09 AM No comments:

Our school has a name!  No we don't legally need a name but why should that stop us from having one?  Now if we don't feel like discussing the finer point of "socialization" with the cashier at Fred Meyer we can just say the kids go to Navigamus Classical School.  Sounds impressive doesn't it?  I figure that will look better on a transcript than "Henderson homeschool".  I even made a little logo.   I will get a picture of it up here eventually.  I am still trying to come up with a theme verse or snappy tag line though.  How about this one "Aut disce aut discede" -Either learn or leave! (Just kidding)
~Christina
Posted at 7:14 AM No comments:

How do you answer that question for children who don't remember that day?  My children don't remember a time when we were not at war.  David was four years old and Abigail just under six weeks old that September.  I struggled to explain why the "bad guys" would choose those targets.  I understand that the towers were symbols of American freedom and financial strength.  The Pentagon is a symbol of our military strength, but how do you explain freedom to children who have never lived in a country without it?  An then, how do you explain why someone would attack us because of that freedom?
Yes they understood the basic facts, airplanes, towers, the Pentagon, a field in Pennsylvania, but they can't understand the horror and grief of that day and all of the days after it.  I am glad they can't understand.  I am forever grateful to the men and women who keep my children secure in their freedom, never understanding what it is to live in fear and without freedom.  I pray that the babies born in Iraq and Afghanistan today won't understand.  I hope their mothers can say "You were too  little to know what it was like back then..... But now we are free".  I pray that day comes soon.
~Christina
"War is an ugly thing, but not the ugliest of things.  The decayed and degraded state of moral and patriotic feeling that thinks nothing is worth war is much worse.  The person who has nothing for which he is willing to fight, nothing which is more important than his own personal safety, is a miserable creature, and has no  chance of being free, unless made and kept so by the exertions of greater men than himself."
-John Stuart Mill
Posted at 8:22 PM No comments:

Don't mess with me.

Grumpy?  Who says I'm grumpy?  I'm two.  I don't need a reason to make this face.  Why are you taking my picture anyway!

Oh ya, I like having picture taken.  Do you like my braids?  I am so cute and I know it!!

LALALALA
Posted at 5:05 PM No comments:

Better late than never right?  David's first week of school went well.  It continues to be an adjustment for him but he will be back in the swing of things soon.  Each day we get through things a little faster.
David
Math - reviewing Epsilon
Latin - Lively Latin lesson one
Rod and Staff Grammar- lessons 1-3
Abigail
Handwriting - Learning cursive letters l,e, h and f
Math- reviewing Beta lessons
Grammar - FLL lessons 100 - 103
Everyone
Narrations and copy-work
Art - basic drawing from "God and the history of art"
MFW - We started learning about Rome this week.  The founding of Rome and the start of the Republic.  I picked up the contact paper and card stock that we need for our timeline but we haven't started the timeline yet.  I have figured out where to put
the timeline after some
thought.  We don't really have hallways so we will have a vertical timeline.  Pictures next week.

The girls made their Roman clay tablets.  You can write a note and then smooth the clay over and over.  Yes, they really did use clay tablet books to write on in Ancient Rome.  Can you imagine taking lecture notes on that?

Second grade is exhausting!
Posted at 4:32 PM No comments:

On Labor Day I took my girls and lady out for the afternoon on Fern Ridge Reservoir. We were joined by a few dozen other sailboats on the lake. It was a beautiful day with good steady air and a warm sun. 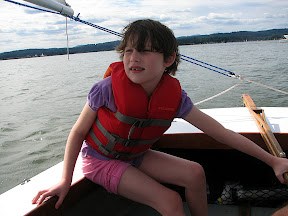 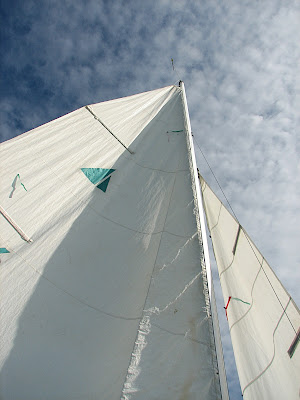 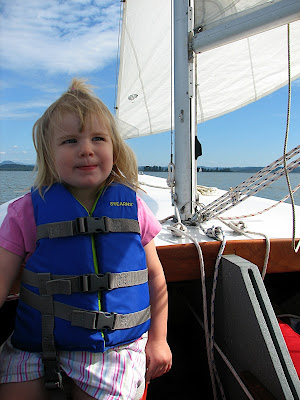 The first hour the girls enjoyed playing "hit the buoy." You can watch the action in this video:

Later both girls fell asleep, Miriam on mom's shoulder and Abigail curled up on a towel on the floor. 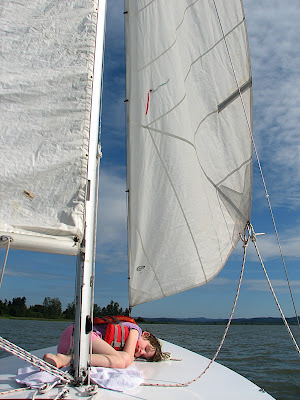 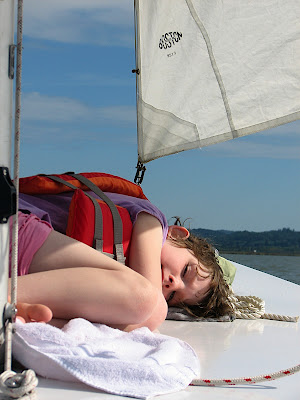 In all we sailed for over four hours and covered over 13 miles of water. A beautiful afternoon. 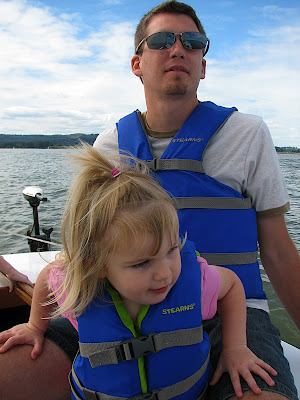 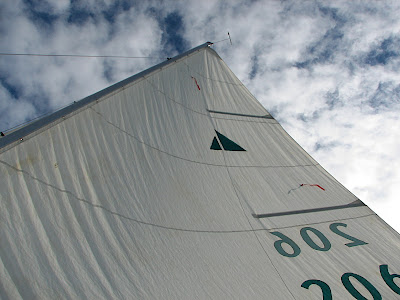