This last weekend David and I did some boat camping up at Detroit lake, right before he headed off to church camp for the week. (High School church camp at that!). It was just one night, but we had a good time. 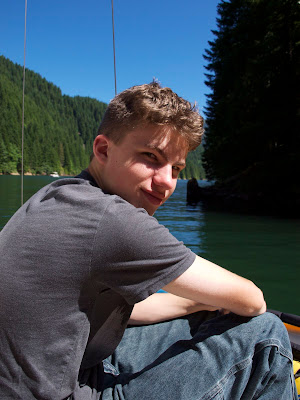 We counted over twenty five salamanders around our boat at one point. We scooped one out for a closer look. 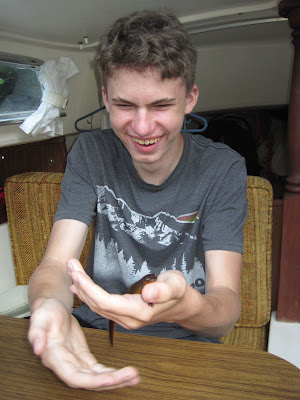 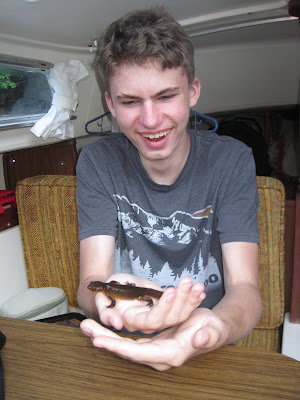 Lots of other critters too, such as this giant dragonfly hanging out in our rigging. 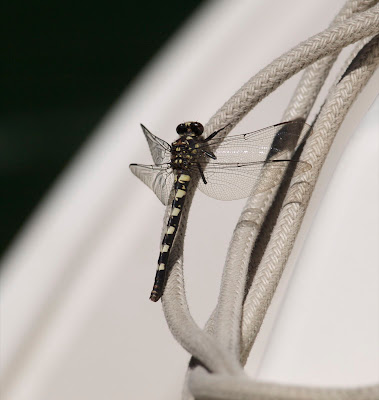 A small swarm of little bitsy bees (Mason bees maybe?) were attracted to our yellow kayak, and would hover all around us waiting for someone to bring out the pollen - they were very friendly and didn't bother us. 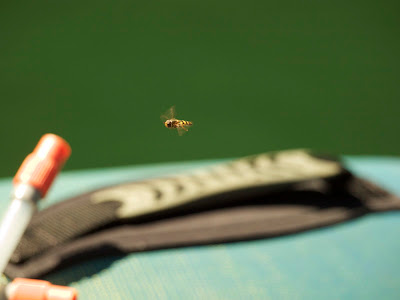 The stars were beautiful, and with the binoculars we could easily make out the Milky Way, some shooting stars, and a number of satellites whizzing by.

But the most excitement we had came about five minutes after we turned into our sleeping bags. We heard some splashing around the boat, and then suddenly some heavy movement on the decking over our heads. Of course we had no idea what was making a giant ruckus, but whatever it was moved down into the cockpit area and started going through the trash can I had left out there. We made a bunch of noise, and after we heard a splash we climbed out of the cabin. Shining our light across to the shore (about 40 feet away) I could see two bright orange eyes staring back at us. The eyes climbed up a tree and continued to stare us down. With the binoculars we were finally able to see that it was a raccoon - a really big one!

After putting the trash in a locker we headed back to bed. Less than five minutes later our friend was back on the deck, scratching around and looking for the trash again! Gutsy thing! Apparently after discovering the trash disappeared, he decided it wasn't worth the risk. He swam off and never came back. We figure he was able to swim out to the boat and climb up the anchor rope to get on deck. What a hoot!

David really wanted to swim, but quickly realized that Detroit Lake's deep waters are still pretty cold. He finally did make it in up to his chest, but only for a few seconds. That definitely beat my effort - I was on the deck enjoying the sun and egging him on. 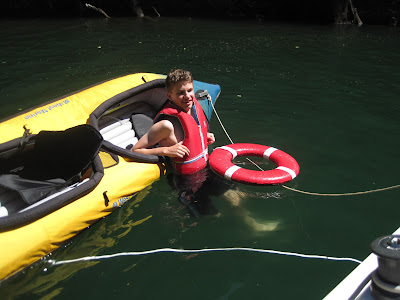